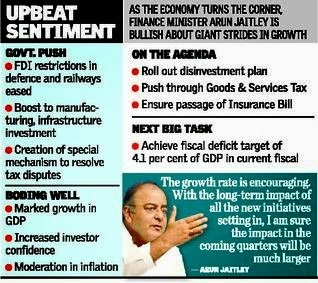 Expressing confidence and optimism on the state of the economy, Union Finance Minister Arun Jaitley said with the long-term impact of all the initiatives taken by the Modi government setting in, growth in the coming quarters could be higher than the 5.7 per cent at which the economy expanded during April-June.

Mr. Jaitley attributed the improved sentiment to the government’s clarity in policy direction and its speedy decision-making in its first 100 days and highlighted the reforms and policy measures it was planning to roll out in the coming weeks.

Early rollout of the Goods and Services Tax (GST) is at the top of the government’s agenda, he said adding that he planned to take up with major political parties the enlargement of the exemptions under the Land Acquisition Act.

Addressing reporters here on the steps the government had taken during its first 100 days, the Finance Minister said though at the time of presenting the Budget he had accepted the challenge of a “daunting” fiscal deficit target of 4.1 per cent of the GDP, it now seemed achievable and his confidence in it was greater.

To a question on the scope for lowering interest rates to spur investments in the economy, he sent out an unambiguous signal to the Reserve Bank. He said he hoped the RBI would cut them very soon, and added that left to himself, he would reduce them “now.”

He said he expected the Insurance Bill, referred to a Parliament Select Committee earlier this month, to be passed in the next session. On the ambitious disinvestment target the government had set, he said the plan would begin to roll out in a few days.

Mr. Jaitley said there was a sea change in the investment sentiment today. Even international investors were looking at India with curiosity and the impact of this would become visible over the next few quarters.
Tweet