Posted by Unknown Posted on 8:12 PM with No comments 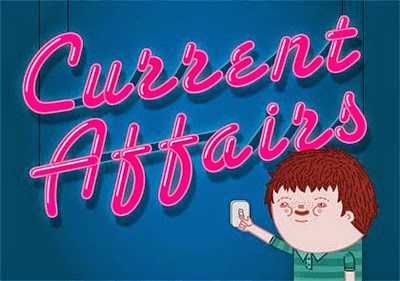 Dear Friends, This post includes the current affairs on 8th August 2104.I hope You like this and share it on your time line.
Day To Day Current Affairs - 8th August 2014
1. WHO declares Ebola epidemic a global emergency
i. The World Health Organisation today declared the killer Ebola epidemic ravaging parts of West Africa an international health emergency and appealed for global aid to help afflicted countries.ii. The decision after a two-day emergency session behind closed doors in Geneva means global travel restrictions may be put in place to halt its spread as the overall death toll nears 1,000.iii. WHO director Dr Margaret Chan, appealed for greater international aid for the country’s worst hit by the outbreak, which she described as the most serious in four decades, echoing an earlier claim by MSF that the “epidemic is unprecedented in terms of geographical distribution, people infected and deaths“.
Note: First discovered in 1976 and named after a river in what is now the Democratic Republic of Congo, Ebola has killed around two-thirds of those infected, with two outbreaks registering fatality rates approaching 90 per cent. The latest outbreak has a fatality rate of around 55 per cent.
2. RBI proposes 'anytime anywhere' bill payment system
i. The Reserve Bank of India (RBI) on 7 August 2014 issued draft guidelines for implementation of Bharat Bill Payment System (BPPS), an anytime anywhere bill payment system. The proposed guidelines describe the basic requirements of operating the BBPS.ii. Bharat Bill Payment System is intended for the implementation of a unified bill payment system across the country.iii. It would enable the customers to pay the bills with the help of agents and getting instant confirmation of the payment made. School fees, municipal taxes and utility bills payments would become easier now.
This integrated bill payment system will comprise of two entities:i. Entity operating at Bharat Bill Payment System (BBPS) will be setting up the standards related to payments, clearance and settlement processii. Second entity would be Bharat Bill Payment Operating Units (BBPOUs). It will be carrying out the operations in adherence to the standards fixed by BBPS.iii. Authorised entities such as agents, banks, service providers, payment gateways would be the participants at the Bharat Bill Payment System.
Bill Payment in IndiaGenerally, most of the retail transactions are carried out through bill payments. The G. Padmanabhan Committee was formed by RBI to study the Feasibility of Implementation of GIRO-based Payment Systems anticipated that around 30800 million bills amounting to more than 600000 crore rupees are paid each year in 20 Indian cities.
3. ASEAN foreign-minister-meeting to kick off in Myanmari. Foreign ministers of the Association of Southeast Asian Nations (ASEAN) have gathered in Myanmar's capital of Nay Pyi Taw for their 47th meeting and related meetings due to begin later on Friday.ii. As the ASEAN Chair for 2014, Myanmar Foreign Minister U Wunna Maung Lwin will preside over the meeting.iii. Marking the 47th ASEAN Day, Myanmar President U Thein Sein will deliver a keynote address on the occasion.iv. The annual ASEAN Foreign Ministers Meeting (AMM) at the Myanmar Convention Center will also brings their counterparts from dialogue partner countries to discuss political, security and developmental issues that have significant impact on the region, said a press release of the bloc.v. Following the AMM, ASEAN Foreign Ministers will meet with their counterparts of the bloc's dialogue partners on Saturday that include Australia, Canada, China, European Union (E.U.), India, Japan, South Korea, New Zealand, Russia and the United States.
4. IDFC appoints Ravi Shankar as head of Bharat Bankingi. Ravi Shankar joined infrastructure finance company IDFC as the head of Bharat Banking with effect from August 8, 2014.ii. IDFC, which recently bagged a commercial banking licence, plans to start bank operations by October next year.iii. With about 29 years of experience across sectors, Shankar will be responsible for conceptualizing and building the rural and inclusion business at IDFC Bank, IDFC said in a statement.iv. Prior to IDFC, Shankar was head of business and marketing at Fullerton India Credit Co Ltd and Senior Vice-President at TNS India Pvt Ltd.v. Prior to IDFC, Shankar was head of business and marketing at Fullerton India Credit Co Ltd and Senior Vice-President at TNS India Pvt Ltd.vi. He holds a bachelor’s degree in economics and a post-graduate diploma in management.
5. Kapil Dev to head Arjuna Award selection committee
i. Former India cricket captain Kapil Dev will head the Arjuna Awards selection committee for choosing this year's outstanding sportspersons of the country while former hockey skipper Ajitpal Singh is likely to be in charge of selecting the Dronacharya awardees.ii. While Kapil, who bagged 434 wickets in 131 Tests in his 16-year-long career, got the Arjuna in 1980, former Olympian Ajitpal was conferred the Award in 1970, and awarded it in 1972. iii. A source in the sports ministry said the government had issued a notification in writing to all persons concerned. The awards will be conferred on National Sports Day which is August 29. iv. Each committee will have 15 members, including 12 eminent sportspersons and three officials.
6. National rural scheme on PPP model launchedi. Rural Development Minister Nitin Gadkari today launched the Shyama Prasad Mukherjee National Rural Mission on PPP model with an allocation of 100 crore rupees.ii. The scheme will be initially available in three districts of the country on pilot basis. The districts are Warangal in Andhra Pradesh and two districts in Maharashtra.iii. The scheme is intended to stop migration from rural areas to cities. He said that the government wants to create infrastructure in villages so that people can get employment there and do not migrate to cities.
That's it for now Friends. Please take time to share this post also on you time lime as well.I always welcome updates, Suggestions and Modifications. Keep following me for regular updates.
Search My Name as " Gandhi Raveendra Reddy " in Facebook and Google , Add me as your friend and Keep Following me for Regular Updates on Bank Job Preparation.
Thank You for being with me !!
Tweet