Posted by Unknown Posted on 7:27 PM with No comments 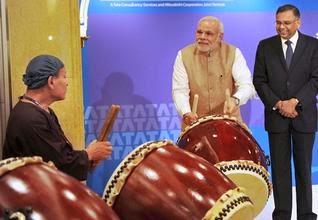 As he wrapped up a packed Japan visit on Tuesday, Prime Minister Narendra Modi appeared to be on a mission — hard-selling India and “Indian-ness,” depending on his audience.
If he declared that India was replacing “red tape” with “red carpet” to businesspersons, he expounded on the Bhagvad Gita, the merits of eating together as a family and even sari-wearing competitions to the expatriate community later in the day.
Mr. Modi spoke at five events, including at a women’s university, the India-Japan Association and a Nikkei-organised gathering.
Crediting India’s IT professionals with altering the image of India, from a land of snake-charmers to “those who played with the mouse,” Mr. Modi made it plain that economics would be his foreign policy driver.
Trust, the Prime Minister said, was superior to Fevicol in binding Japan and India together, even as he emphasised the values of democracy, without mentioning China by name.
To Indians abroad, he advocated eating one meal together as a way of building family bonds and speaking in the mother tongue at the dining table.
Mr. Modi wondered whether his “secular friends” in India would kick up a storm because he had gifted the Gita to Emperor Akihito and Prime Minister Shinzo Abe. In his view, there was nothing bigger than the Gita to gift world leaders.
“But they [the secularists] also have to make a living. And, if I am not around they won’t be able to manage.”
‘Three Ds’
Addressing a 2,000-strong gathering at a seminar organised by the Japan External Trade Organisation (Jetro) and Nikkei, Mr. Modi said India was attractive to Japan on account of three Ds — democracy, demography and demand.
Modi said three Ds — democracy, demography and demand — make India attractive to Japan
Tweet