Posted by Unknown Posted on 7:31 PM with No comments 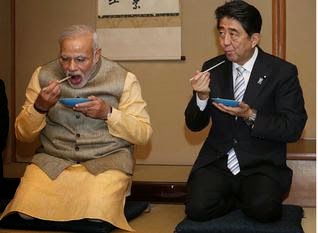 Japan on Monday pledged to invest Rs. 2.1 lakh crore ($35.5 billion) in a wide spectrum of projects in India over five years. These include infrastructure, clean energy and skill development.

Announcing the “Japan-India Investment Promotion Partnership,” both leaders were upbeat about their future relationship. Mr. Modi said Mr. Abe had taken an “oath” to further their relationship.
The Japanese leader expressed his “readiness to provide financial, technical and operational support” to introduce the Shinkansen, or bullet train, along the Ahmedabad-Mumbai route.

On energy cooperation, the two countries decided to collaborate in the procurement of liquefied natural gas (LNG) and upstream development of oil and gas as well as clean coaltechnology.

As India and Japan look to space cooperation, Tokyo lifted six of India’s space and defence-related entities from its foreign end-user list. Japan also supported India’s entry as a full member of the Nuclear Suppliers Group.

“This is not just a play of words, but a decision that reflects the solemn responsibilities of our two governments and two countries,” Mr. Modi said.

Both sides also decided to double the number of Japanese companies operating in India in five years.
Tweet